The Canalway Trail Ambassador program recently expanded to the trail in Central New York. Already, one of the new Ambassadors based at Chittenango Landing has logged more than 15 hours on the trail.

Trail Ambassadors like Chittenango’s Dave Kellogg are volunteers who provide a warm welcome to Erie Canalway Trail users and offer assistance with directions, local attractions and lodging, and other issues that may arise on the trail. Dave’s work with the Old Erie Canal Working Group,which works to promote the trail and Canal corridor to both locals and visitors, served as his introduction to the Ambassador program.

Dave’s duties as an Ambassador has allowed him to meet cyclists and trail users from the surrounding communities, other states, and across the world. Dave also contributed to this year’s Cycle the Erie Canal (CTEC) bike tour by creating temporary trail signage directing CTEC riders to the Fayetteville Feeder Canal Trail and to local businesses. He was there to answer questions about the Feeder Canal, and reports that about one-third of the tour cyclists stopped at the trail juncture.

Last week, Dave met Peter from Dublin, Ireland. In a perfect example of Trail Ambassadorship, Dave engaged Peter in conversation and found out he has been cycling non-stop for 3 1/2 years, with recent trips through New Zealand and Australia. Before allowing him to head off on his way – next stops Buffalo, Montreal, Maine, Boston, and back to NYC – Dave showed him around Canastota and the village’s Canal Town Museum.

The Canalway Trails Association New York (CTANY), in collaboration with Parks & Trails New York and the New York State Canal Corporation, initiated the Canalway Trail Ambassador Program in order to provide a “presence” on the trail and enhance the experiences of trail users.

In 2008, Ambassadors began riding on a segment of trail in Schenectady County as a pilot project under the auspices of the Friends of the Mohawk-Hudson Bike-Hike Trail, as the Canalway Trail is known in this area. In 2012, the program expanded to the Rochester area. The new Chittenango Landing Canal Boat Museum/Old Erie Canal group is the first Ambassador program in Central New York.

To learn more about the program and join the ranks of Canalway Trail Ambassadors, email PTNY at canaltrail@ptny.org or call 518-434-1583. 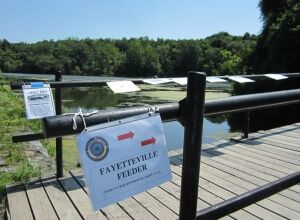