All week leading up to the August 14 Champlain Canalway Trail Bicycle Tour, the weather forecast read “heavy rain.” That morning, though, as forty-plus riders assembled at Hudson Crossing Park near Schuylerville, the sun defiantly emerged from the clouds, signalling good tidings for the Tour. 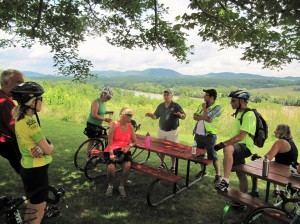 In recognition of the centennial of the National Park Service, the 2016 Champlain Bike Tour explored several sites related to events surrounding the 1777 Battles of Saratoga en route to Saratoga National Historical Park. Beginning with the site of the “Bridge of Boats” at Hudson Crossing Park, where the British army crossed the Hudson River on planks laid across boats called bateaux, the group cycled along the original Champlain Canal towpath to Schuylerville and Fort Hardy Park. Fort Hardy was the location where the surrendering British stacked their weapons after defeat. The next stop was the Schuyler House, the country home of American General Philip Schuyler, was rebuilt in 1777 after the British burned the previous one. From there the cyclists continued south along Route 4, with a stop to learn about the women associated with both armies, before arriving at the national park visitor center.

On this very warm, humid day, riders welcomed the break from pedaling at the Visitor Center, and enjoyed a refreshing lunch delivered by 9 Miles East Farm. They also listened to a talk about the significance of the two battles fought nearby.

Reenergized, the riders took the national park tour road to the Neilson Farm, where a guide explained the key advantage the Americans had by occupying the high ground there. From this point, most riders headed south to Lock 4 near Stillwater, where they boarded the Caldwell Belle paddle wheeler for the return trip upriver. The remaining cyclists completed the tour road, with additional informative stops, before retracing their route back to Schuylerville.

This tour, the 5th annual, was presented by the Champlain Canalway Trail Working Group in partnership with Lakes to Locks Passage, Hudson Crossing Park, the National Park Service, Friends of Saratoga Battlefield, and Akiba Travel.