Throughout the year, the Canalway Trail system provides nearly 360-miles of multi-use trail for bikers, walkers, and even cross country skiers alike. In the Capital Region and the Syracuse area (Oneida, Madison and Onondaga county), there are a surplus of bike-friendly rail trails, roads and canalway trails. Both areas offer ‘Towpath Tuesday’ programs—an opportunity for cyclists of all abilities to get some exercise, socialize, and appreciate local attractions. If you’re looking to be introduced to summer cycling on the Erie Canal, and other bike friendly trails, the two groups profiled below are a great place to start.

Tuesdays on the Towpath – Madison, Oneida, Onondaga…. and NOW Herkimer and Wayne Counties!

In the spring of 2012, the Chittenango Landing Canal Boat Museum (CLCBM) and the Syracuse Bicycles shop partnered to create a ride group—Tuesdays on the Towpath. Since then, their series has expanded to encompass new partners and a variety of ride options.

The dates of each ride change month to month, and are reflected in the schedule copied below. Most events are located on the Old Erie Canal State Park section of the Erie Canal Trail (ECT), or on roads or trails that connect to the ECT. However, the ride series has grown to include Rome and Herkimer, and now Wayne County. Common stops along each ride include historical sites, local museums, and other canal features. After the 8-10 mile ride, many cyclists head into town to enjoy local food and craft beverages.

In an interview with CLCBM Executive Director Chris O’Neill, she cited two main factors that have lead to the success of the program. First, it attracts recreational riders, which she deemed an “under-served market.” Second, it links outdoor recreation with cultural heritage and small town shops, restaurants, and bars. Since its founding, Tuesdays on the Towpath has garnered support from groups such as the Erie Canalway National Heritage Corridor, Parks & Trails New York, and Mello Velo Bike Shop. Historical credibility comes from the Erie Canal Museum—also a popular stop during Tuesdays on the Towpath excursions. 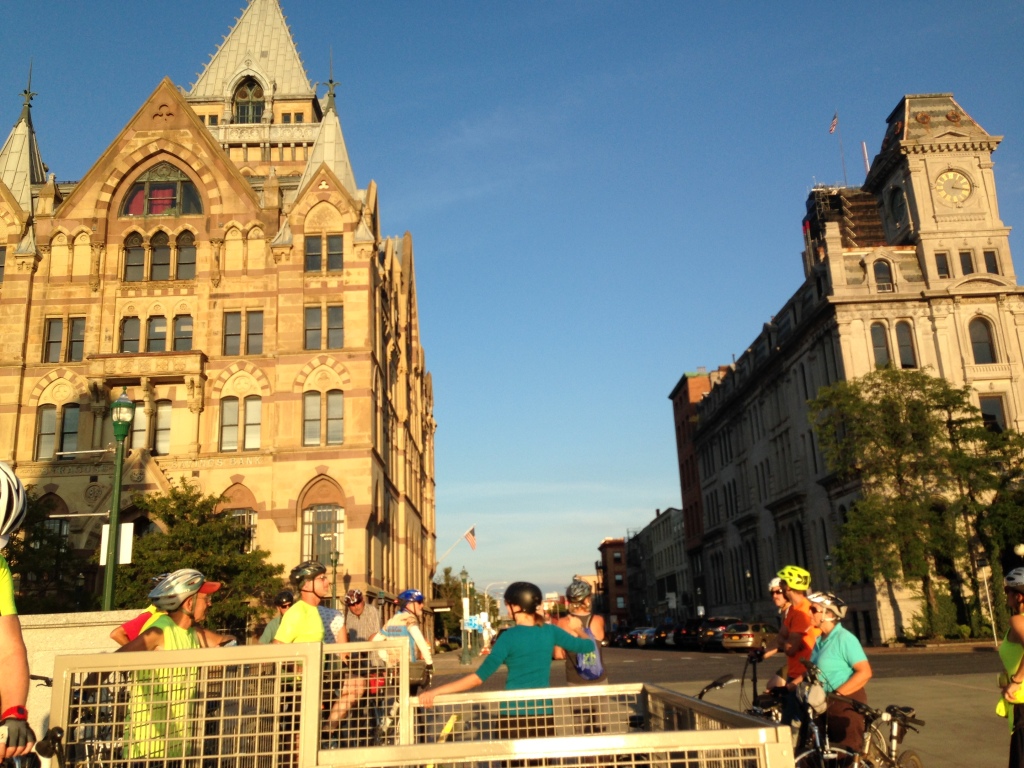 More information on the trips may be found at the Chittenango Landing Canal Boat Museum or in the schedule shown below.

If you’re interested in cycling and the history of the Erie Canal, and you happen to be in Central New York on a Tuesday, don’t miss this exciting, free ride. It surely won’t disappoint!

In the Albany area, there is another trail-focused series whose ride day happens to be Tuesday—Towpath Tuesdays.

Led by staff at Bike Barn, a bike shop in Cohoes, NY, cyclists meet at 6pm sharp and ride one of three routes every week. Their most popular route starts in Watervliet and continues along the Hudson River until Albany. Other routes include the Mohawk-Hudson Bikeway from Cohoes to Niskayuna’s Lyons Park and from Van Schaick Pond in Cohoes to Peebles Island State Park. The atmosphere is light and fun and the views are stunning. Cyclists of all ages and experience levels are welcome. Bike Barn also offers occasional moderate mountain bike rides Sundays throughout the season. For meeting locations and ride schedules, visit Bike Barn’s Meetup page or call (518) 238-BIKE.