In its heyday, the NYS Canal System was an economic engine that led to the development of hundreds of New York cities, including Buffalo, Rochester, and Syracuse, and even established New York City as the United States’ center of commerce. Today, the Canals are being repositioned as major recreational corridors, with millions of visits to the waterways and adjacent trails driving a resurgence of investment and economic development in the more than 200 communities located along the 524-mile NYS Canal System. In fact, the 1.6 million annual visits to the 360-mile Erie Canalway Trail, which is considered the spine of the recently-announced 750-mile statewide Empire State Trail, generate more than $250 million in economic impact.

This economic impact is expected to grow thanks to a new $2.5 million design competition called Reimagine the Canals that Governor Cuomo announced in September. The goals of the competition are to promote the Canal System and its trails as tourist destinations and a recreational asset for New York residents and visitors; encourage sustainable development along the Canal System; highlight the Canal System’s heritage; and secure the long-term financial sustainability of the New York State Canal Corporation.

Reimagine the Canals is open to groups from around the world; it will seek entries on two separate tracks, one for infrastructure and the other for programs that have the potential to increase recreation use and tourism.

Reimagine the Canals will leverage the strong community and non-profit presence along the corridor by requiring that entrants partner with these groups. First round finalists will receive $50,000 and second round finalists will receive between $250,000 and $1.5 million for capital and planning projects. All entrants’ submissions will be judged by the New York Power Authority and the New York State Canal Corporation, the two managing agencies for the Canalway Corridor. 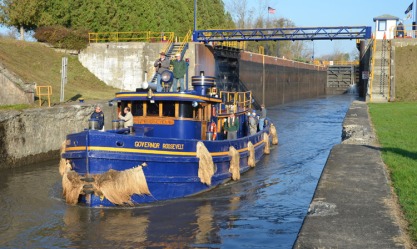 “The Canal System is a vital part of New York’s storied past and it is critical that it continues to be an essential component of our state’s future,” Governor Cuomo said. “We’re looking for bold and innovative ideas that ensure the canal system and its surrounding communities can grow and prosper and with this competition we encourage bright minds from across the globe to contribute their best ideas to help bring this piece of history to new heights.”

For more information about Reimagine the Canals, including application details and to follow along with the visioning process, visit www.reimaginethecanals.com.