Note: TrailsBlog is a new monthly feature from PTNY that will highlight an existing, planned or proposed trail in communities around the state. If you have a trail you’d like to see highlighted, let us know by emailing ptny@ptny.org

As you come around the circular West Jefferson Street and past the former Syracuse Armory, now the home of the Museum of Science and Technology, you come to a small trailhead with benches around a kiosk and the crumbling concrete retaining wall of the neighboring rail line. This is the southern terminus of the Onondaga Creekwalk, a 2.6 mile trail that stretches from Syracuse’s urban core out to the shores of Onondaga Lake. 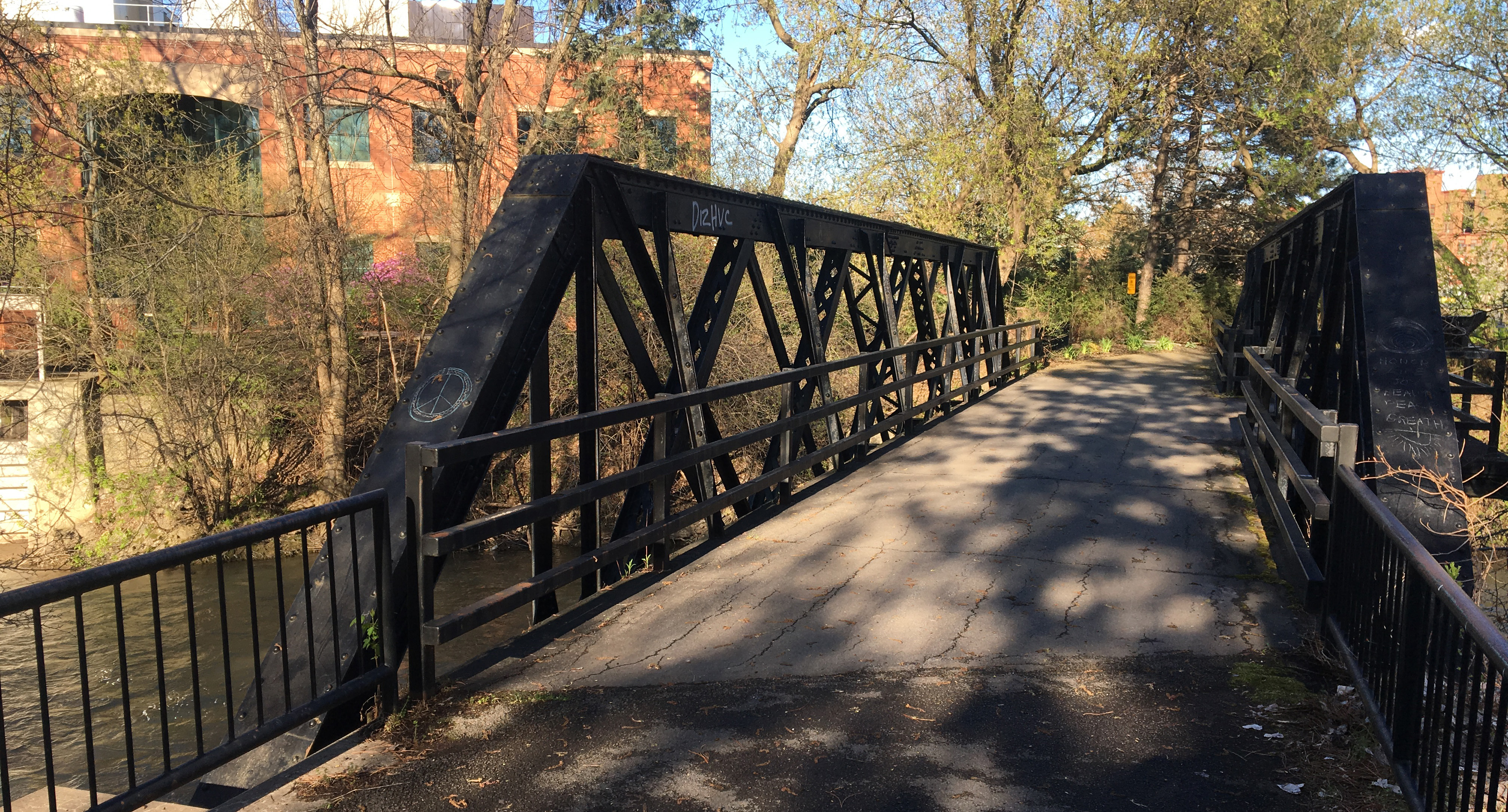 Onondaga Creek was the waterway, along with the Erie Canal, around which Syracuse developed. Originally a hotbed for salt production, the meandering course of the Creek was channelized and straightened over decades of development. As much of the development was industrial in nature and in keeping with stormwater management practices of the time, the Onondaga Creek became a dumping ground for chemicals and runoff from the city’s sewer system. The water quality got so bad that by the end of the 20th century, Onondaga Lake was considered one of the most polluted lakes in the United States. Onondaga County and the New York State Department of Environmental Conservation have been working since 1998 on a comprehensive program to improve the water quality of the lake and help restore Onondaga Creek. The Onondaga Creekwalk was initially proposed in 1979, and Phase I as built today runs from Armory Square north to the mouth of the creek at Onondaga Lake.

Heading north from Armory Square, the trail retains a distinctly urban feel. The creek runs to the west of the trail, and while it does follow a man-made channel through this stretch, vegetation that has grown along the sides of the trail help give creekwalk feel like a small refuge of nature in the middle of downtown Syracuse. The surrounding buildings include a mixture of old industrial buildings that have been renovated as residential and retail space and newly constructed infill developments. The trail rises to the level of West Washington Street with a switchback ramp. While a relatively unremarkable street today, West Washington Street previously featured the main line of the New York Central Railroad running down the middle of it at grade. As a result, the bridge that carries West Washington Street over the creek dates back to 1880. The Onondaga Creekwalk runs alongside city streets between West Washington Street and Wallace Street, running north on Franklin Street and passing the Erie Canalway Trail which runs on Erie Boulevard west of the Creekwalk and Water Street east of the path. The distinctive yellow line marking the trail turns left on West Genesee Street before returning to the channel of the Creek at Wallace Street.

For this middle stretch of the Creekwalk, the path runs right along the Creek and passes under a number of highway ramps before reaching the Franklin Square neighborhood. This stretch of the trail features distinctive brick paving and a number of legacy bridges over the creek reflect the area’s industrial heritage. The Creekwalk continues north and crosses for the first time to the west side of the waterway after passing over a former Delaware, Lackawanna & Western Railroad bridge dating back to 1911 (see photo above). The trail continues to wind north before opening up into the Inner Harbor area. The Inner Harbor was originally developed to ensure that Syracuse had a connection to the state’s canal system after the 1918 Barge Canal renovation abandoned the Erie Canal through downtown in favor of a route north of the city. The Inner Harbor was largely abandoned in the late 20th century, but recent efforts by the state and the city have seen the development of parkland and outdoor event space, and developers are working to continue the revitalization of the area through the construction of residential and retail space.

The last mile of the Onondaga Creekwalk sees the character change. Gone are the old industrial buildings and tight, narrow winding stream. Instead, the Onondaga Creek at this stretch is a wide channel that accommodated the barge traffic of the early 20th century. All across the landscape, signs of the ongoing efforts to remediate the area can be seen, leaving a less than ideal environment currently but full of hope for the future. The trail eventually makes its way up to Hiawatha Boulevard, a car-centric quasi-highway that brings Central New Yorkers to the giant Destiny USA shopping mall. In the least appealing stretch of trail, the Creekwalk takes you along Hiawatha Boulevard’s narrow sidewalk to cross the creek one last time, before doubling back down to the creekside for the last stretch up to the lake shore. Unfortunately, the creekwalk under the CSX railroad tracks at the lake’s edge is currently closed to the public, but is slated to be re-opened as part of the completion of the Loop the Lake Trail that will completely surround Onondaga Lake.

The Onondaga Creekwalk stands to get additional use as a result of the completion of the Empire State Trail in 2020. This $200 million statewide project will close the gaps in the Erie Canalway Trail across the state and create the nation’s longest multi-use trail, stretching from Buffalo to Albany and from New York to the Canadian border. The most challenging gap in the Erie Canalway Trail has been the 14 miles through Syracuse, but that is slated to be closed with $36 million worth of projects building new stretches of trail. The Empire State Trail route will follow the Onondaga Creekwalk for a stretch, as the trail will join the Creekwalk at Hiawatha Boulevard, running from west to east, and leaves to stay on the Erie Canalway Trail route on Water Street at Franklin Street.

Photos of the Onondaga Creekwalk