A long distance traveler coming up the Champlain Canalway Trail and turning onto the Feeder Canal Trail to get into the Adirondacks. A family vacationing in Lake George Village and taking a day trip down the Warren County Bikeway. A Glens Falls resident commuting to work in Hudson Falls. A cycling enthusiast going for rides around Queensbury and up along the shore of Lake George. These are just some of the potential bicyclists who could be bringing business to Glens Falls and the greater Warren County area and the focus of the the annual Bicyclists Bring Business roundtable and bike-a-round held in Glens Falls on September 10 and 11.

The Queensbury Hotel provided an excellent setting for the evening discussion on the 10th. And, in a Bicyclists Bring Business first, the event kicked off by officially certifying the hotel as a Bike Friendly New York business, recognizing the work it does to meet the needs of cyclists. 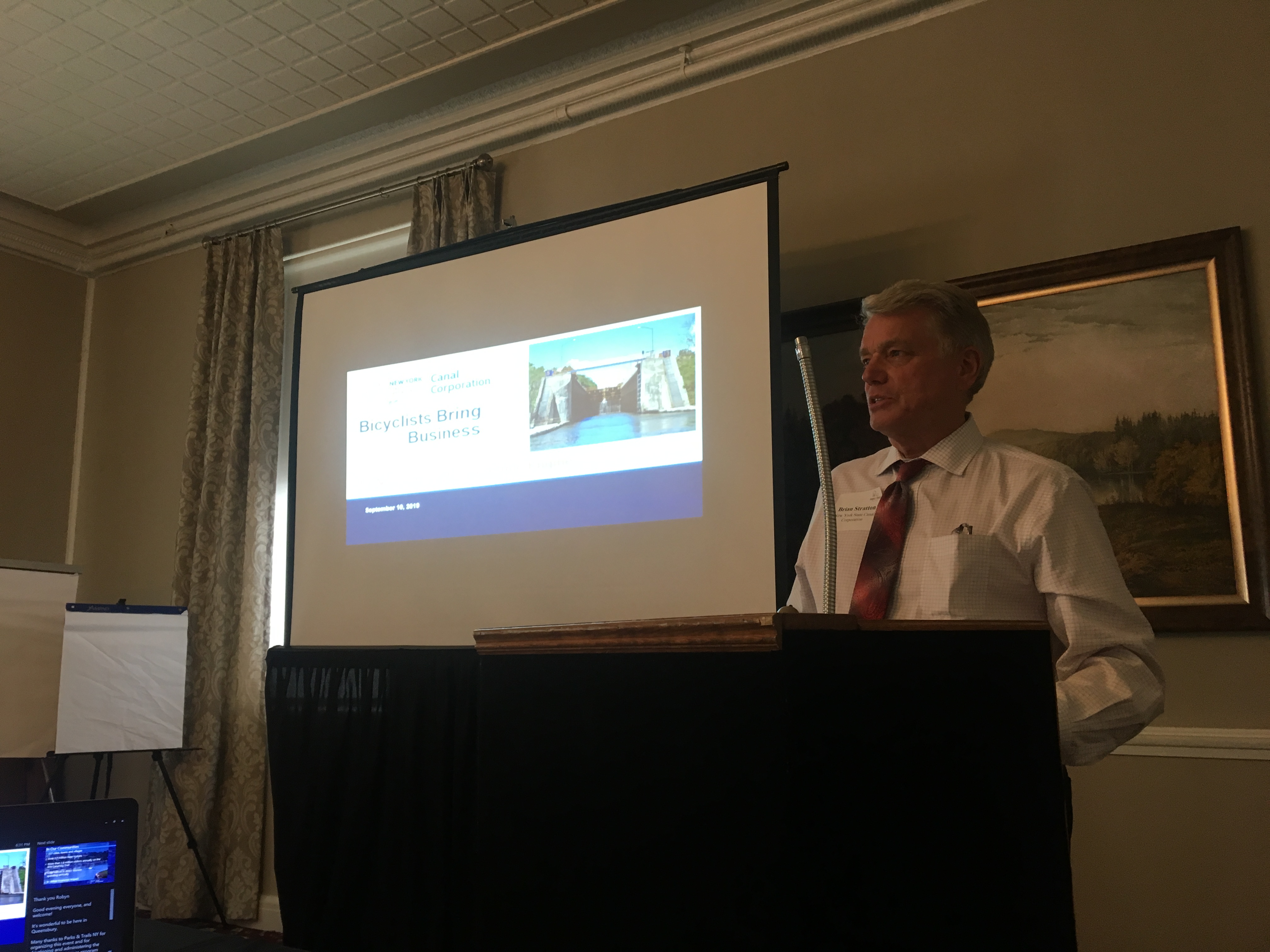 The presentations began with Brian Stratton, Director of the New York State Canal Corporation, informing attendees of the Canal System and Canalway Trail’s impact on the economy of upstate New York and on the Canal Corporation’s grant programs to support trail development. Sasha Eisenstein, Trails Manager at the Canal Corporation, followed with an update on the status of the Empire State Trail. This statewide multi-use trail will span 750 miles and is expected to be completed by 2020. Eisenstein gave updates on specific projects that will help close the gaps in the existing Erie Canalway Trail, providing safer riding conditions and improving connections between local communities across the state.

The final presentation came from Dylan Carey, Project Director at Parks & Trails New York. The presentation communicated best practices for catering to bicyclists and cycling tourists, successes of other popular multi-use trails such as the Great Allegheny Passage in Pennsylvania and Le P’tit Tren du Nord in Quebec, and highlighted resources local community members can use to bring cyclists to their business districts. Carey shared images of local businesses that accommodate cyclists and amenities that trail-side communities provide, adding to the experience for both local and long-distance trail users.

The evening concluded with attendees participating in discussions about how communities like Glens Falls can better capitalize on cyclists and accommodate them. The three groups each consisted of a mix of bike shop owners, members of the WCSQBO, local bicyclists, elected officials, tourism industry workers, and many others. Participants were eager to share their thoughts and suggestions. At the end, facilitators shared main ideas their groups produced with all the guests.

The following morning, PTNY and the Canal Corporation joined members of the WCSQBO and other interested bicycle advocates in exploring Glens Falls by bike. Thankfully, the rain that doused the region overnight stopped just as participants arrived at the Queensbury Hotel and the grey skies gave way to sunshine as the day progressed.

The bike-a-round aims to get local residents and decision makers to view their local trail system as if they were visiting cyclists, and to see what the community does well in attracting cyclists and what they could improve upon. With that in mind, the ride started from the parking lot of the Queensbury Hotel and rode up to the Warren County Bikeway. We then headed down the bikeway towards its southern terminus, as if we had ridden in from Lake George. Riders looked for signage, safety issues, and indications of how to get from the trail to local business districts.

The ride stopped in at Grey Ghost Bicycles, which opened in a new location a block from the bikeway earlier this year, to discuss how the shop plans on taking advantage of its proximity to the trail and what services it might be able to offer to long distance cyclists (and to meet their dog, Griffin!). Shortly after leaving, we reached the end of the bikeway and had to navigate city streets, including the busy Warren Street/Route 32, to reach the Feeder Canal Trail.

The Feeder Canal Trail has a much different feel to it than the Warren County Bikeway, which passes largely through tree-lined, residential neighborhoods. The Feeder Canal served a primarily industrial function for much of its existence – and that’s very much still the reality today. To get to the trailhead, you pass by a parking area for cement trucks. The local wastewater treatment facility is just off the trail. One of the roadways you cross while riding is plastered with signs warning trail users to stay only on the trailway and not to stray off onto the adjacent private property of the cement plant.

We rode out to the trail crossing at Warren Street in Hudson Falls before turning back to experience the trail as if coming into Glens Falls along it. This would be the experience of riders coming in off the Empire State Trail. The Feeder Canal’s eastern end is at the Champlain Canalway Trail, the northern leg of the Empire State Trail, just east of Hudson Falls and north of Fort Edward. We traveled back the way we came along the Feeder Canal, and marveled at the newly installed high visibility crossing at River Street. We rode back to the Schermerhorn Street end of this eastern-most stretch of the Feeder Canal Trail. On-road riding was required to get to downtown from this point, and we rode along the high volume Warren Street/Route 32. While our group was able to ride along this street safely, less confident cyclists might be dissuaded from stopping in downtown Glens Falls due to the need to follow this route to get to the central business district.

We rejoined the Feeder Canal Trail just west of Glen Street, where a parking area provided a beautiful place to stop and admire the Hudson River, and the namesake waterfalls that give Glens Falls its name. We stayed on the Feeder Canal Trail from this point out to Haviland Cove Park, before winding back into downtown on neighborhood streets and by using bike lanes that have been painted along South Street.

The bike-a-round ended with lunch at Glens Falls’ popular Davidson Brothers Brewery, where the intrepid group refueled from the mornings ride and had a couple of cold beers to wash it all down. PTNY thanks all of the participants in the two segments of this year’s Bicyclists Bring Business, as well as all of the partners that helped plan the event, plus local businesses the provided us with the flavor of Glens Falls.

However, Bicyclists Bring Business isn’t confined to this week’s events. The process continues as participants and local stakeholders provide feedback through an online survey. PTNY will draft a report including next steps for enhancing the local trail network later in the Fall, and then release the final report in early 2019.

Stay tuned to ptny.org/events/bicyclists-bring-business for more information on the planning process, but don’t forget to get over to the trails while the weather holds and bring some business to our great Canalway Trail communities!