After 15 years, the Dix Bridge was finally opened for recreational use in November 2013. With the season’s first snow expected in a few weeks, the time available for snowmobilers to get the bridge ready for wintertime use was short and full of logistical challenges.  Thanks to the efforts of many groups, when the snow arrived  snowmobiles were able to safely cross the Hudson River between Saratoga and Washington Counties.

Saratoga County DPW required that the wooden deck of the bridge be protected from snowmobile track studs and carbide runners under the skis, so long before the bridge was completed local snowmobile clubs began securing used heavy rubber conveyor belts to cover the surface. The material was chosen because other clubs had used it successfully to protect similar bridges in other parts of the state. However, finding sufficient material was the first challenge snowmobilers faced.

There were also a number of difficulties associated with the rubber material itself. Locating a storage facility that would accommodate the rubber’s weight and varying lengths and widths was difficult. As the rubber was rolled in storage, the cold temperatures made unrolling for installation problematic. 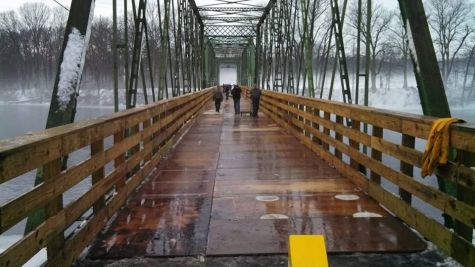 Lastly, the material could not be secured to the existing wooden deck, so a means had to be devised to allow it to float above the deck. The SnoBlazers Snowmobile club of Washington County heard that the marine grade plywood originally used to protect concrete during the bridge’s construction had been turned over to Curtis Lumber in nearby Schuylerville when the bridge was completed. The SnoBlazers and Saratoga County’s Lincoln Mt. Snowmobile Club of Gansevoort purchased more than 100 sheets of this plywood and, in four hours, connected it with H clips to create a secure floating floor for the bridge.

With the bridge fully protected, snowmobilers from Saratoga County were able to access all of Washington, Warren, and Rensselaer Counties, and the trail system of Vermont, all by snowmobile on permissioned, signed, and groomed trails. The bridge and the adjoining trails were heavily used this past winter, testament to the significant interest by not only by snowmobilers, but also other winter recreationists.

When the snow season was over, the two clubs met again to remove the plywood sheeting, returning the bridge to its warm weather uses.  Two old hay wagons were secured and all sheeting was stacked on those two wagons.  The wagons were then transported to a nearby farm for storage until next December.