Hostel Buffalo-Niagara offers far more than a roof and a warm bed to cyclists making their way through Buffalo on the Canalway Trail and other long distance touring routes. The hostel offers a long list of amenities geared toward cyclists, a location in the heart of downtown Buffalo, and a welcoming family atmosphere. That’s why they are this issue’s featured Trailside business.

Hostel Buffalo-Niagara has been welcoming visitors from around the world to downtown Buffalo since 1996. The hostel has approximately 50 beds, and a location in the shadow of the iconic Shea’s Performing Arts Center sign on Main Street provides easy access to all of Buffalo’s charms. True to the traditional hostel concept, lodgers rent a bed, and have access to shared bathroom facilities. Hostel Buffalo Niagara also provides access to a full kitchen and luggage storage, all for a low price.

As with many hostels, Hostel Buffalo-Niagara has come to attract specific groups of travelers, including backpackers, travelling artists, and cyclists. Affordability and a great location have a lot to do with enticing these groups, but the hostel’s management has made special efforts to cater to cyclists. Manager Jon Privet explained that they were influenced by experiences with reduced rate biker/hiker campsites found in Western parks, believing that cyclists should be rewarded for choosing emission-free, low-impact transportation, and shouldn’t pay the same rate as more energy intensive modes. As a result, the hostel began offering a significant discount to thru-cyclists who weren’t travelling with a car.

They didn’t stop there, though. Hostel management has created an in-house bike share program, where lodgers can use a bike for local exploration at no cost. There’s also a bike storage room, and of course bike tools available for minor fixes. Cyclists also benefit from management’s knowledge of local cycling routes, and connections to the local cycling scene. In the summer, the hostel offers a free “bike breakfast” each Wednesday for local bike commuters, and they are involved in a local bike registration system called Bike Index. 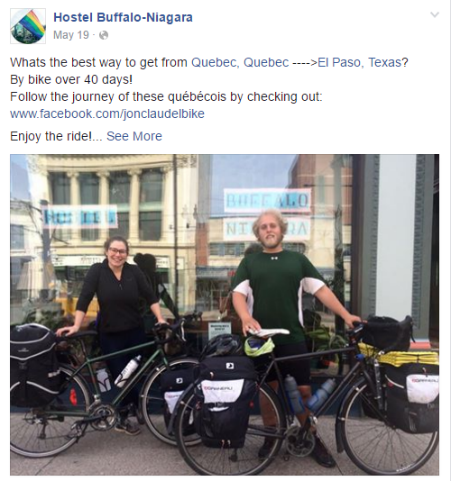 The hostel also posts great stories and pictures of thru cyclists on its Facebook page.

Manager Jon Privet explained that Hostel Buffalo-Niagara’s bike-friendly ways stem from being “inspired by touring cyclists.” Well, Hostel Buffalo Niagara, you inspire us and serve as a great example of a Canalway Trail business going the extra mile for cyclists!