For Diana Marek, the Erie Canalway Trail has long been a part of her family’s recreational routine. The Schenectady resident started using the trail with her children when they were younger. When they grew up and moved out, Marek started throwing her bike on her car so she could explore other sections of the 360-mile trail. Her curiosity eventually morphed into a goal to complete the entire trail before she turned 71. In August, just before her 71st birthday, she rode the last section between Syracuse and Ilion, becoming an End-to-Ender in the process.

Though the proximity of the trail to home initially attracted Marek, her curiosity to explore new sections led to a newfound appreciation for the history and beauty of Upstate New York. According to Marek, “the old canal, the locks, the Barge Canal pieces, the historical signs with their old photos, and the old canal museums [make] the trail such an asset to our state.” The bustling atmospheres around Schoen Place and Fairport, with rowers, pedestrians, cyclists, and diners all congregating along the Canal, really stood out to Marek. 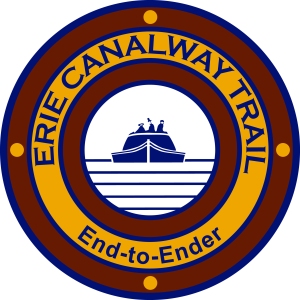 In the future Marek looks forward to seeing the trail fully-completed and the introduction of Amtrak’s roll-on service along the corridor. While many businesses are located adjacent to the canal and offer amenities to cyclists, she hopes that the growing number of customers coming from the trail will eventually lead to more businesses becoming bicycle-friendly.