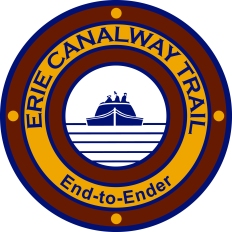 Although a lot of us have had to cancel recent travel plans, we hope you’re still thinking about the anticipated “rain date” when the places that you loved to frequent are open, filled with people and the air is buzzing with good, positive conversation again. Getting on a plane might not be realistic at this moment, making out of state travel a little more complicated; however, there’s so much to see across New York State that we highly recommend you create an “end of isolation” itinerary that takes you along the Erie Canalway Trail. Join the hundreds of people that are registered “End to Enders” who have traveled the 350-mile Erie Canalway Trail (either in one trip or several) by land or by water.

In the past 20 years, Parks & Trails New York Canalway Trail end-to-enders have traveled more 3.5 million miles along the Canalway Trail!

How you choose to see the state is up to you; just make sure you have enough time and the ability to appreciate the scenery, history, and eateries along the way. This might mean hopping on your bike (or recumbent bike), pulling out those rollerblades you stuck in the basement over the winter, or simply treating yourself to a new pair of running sneakers. Whichever mode of transportation you decide to take, or whether or not you decide to only tackle a portion of this adventure, you’ll be logging a lot of miles so make sure you’re prepared with the appropriate clothing, overnight needs, and equipment (maybe think about bringing a patch kit or check out a map of Dero’s bicycle fix it stations that can be found all along the route).

As you move across the state from Buffalo to Albany, passing through unique places filled with a variety of characters, be sure to check out these 20 attractions along the way:

Riverwalk along the Niagara River 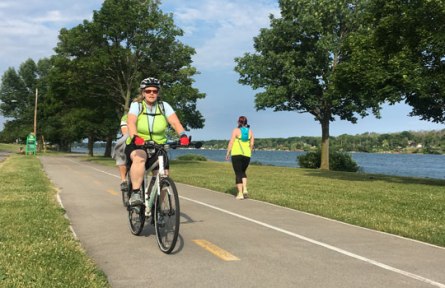 The western part of the Erie Canalway Trail is referred to as the Shoreline Trail and includes the Riverwalk along the Niagara River. This section begins ­in downtown Buffalo and passes through both LaSalle and Riverside Parks. It is a great place for a scenic picnic.

This theatre is listed on the National and New York State Register of Historic Places. It is home to the Mighty Wurlitzer Organ. This local landmark and movie house is known as the “Showplace of the Tonawandas.” Built in 1926 and designed in Italian Renaissance style, it currently seats 1,140 and hosts a number of concerts and events every year.

Located just off the trail you will find a 35-acre historical village, complete with costumed interpreters – get a feel for what 19th century life was like!

Due to a 600-foot elevation change from one end of the canal to the other, many locks were built along the canal. In Lockport, there is a unique opportunity to see one of the rare remaining original locks known as the “Flight of Five.”

Experience the Industrial Revolution and travel through time on a 75-minute guided historic tour. This underground tour offers a view of Erie Canal Locks 34 & 35, the “Flight of Five,” and a 2,100-foot water-powered tunnel blasted out of solid rock.

This refuge was founded in 1958 and is operated by the U.S. Fish and Wildlife Service. It is a stopping point for waterfowl and other migratory birds and provides a habitat for a variety of other animals. The refuge encompasses several large pools, swamps, meadows, and woodlands; there are four overlooks and four trails open throughout the year.

In order to accommodate the passage of boats, lift bridges were constructed that could be raised and lowered. The lift bridges are an iconic symbol of the Erie Canal.

Considered one of the finest art museums in the world, the MAG allows you to explore 5,000 years of human imagination – from ancient artifacts to 21st century works, including Monet, Rembrandt, and O’Keefe, to contemporary artists such as Kehinde Wiley and Mickalene Thomas. The MAG also features special exhibits throughout the year.

The Highland Park Conservancy, located in Rochester, is home to an arboretum, botanical collections, the Lamberton Conservatory, and Warner Castle.

Lyons boasts many murals that highlight the history of the canal. Beginning in 2007, several public art installations have been featured on Main Street. Today, the project has been nicknamed “Mural Mania.”

Located in Syracuse, the Erie Canal Museum is the only structure of its kind in the United States. The building was formerly a Weighlock Building in the 1850s, where canal cargo was weighed. The Museum shows visitors 200 years of Erie Canal history through interactive displays, hands-on exhibits, a full-size replica canal boat, narrative audio tracks and original artifacts.

This 2,000-acre park gets its name from its two beautiful blue-green lakes. The lakes are open for boating and swimming. Camping is also available in the abundant forested areas of the park.

If you want a wildlife viewing experience, take a walk in one of the many restored wetlands located near the Nature Center. The Great Blue Heron rookery on the east trail system is easy to view from the mowed path. There are approximately 7 miles of trails, with a 900-foot boardwalk on the west side.

Verona Beach State Park, located on the eastern shore of Oneida Lake, is a dream for picnickers and campers. The lake, Black Creek, cattail marshes, and bottomland hardwood swamps give Verona Beach one of the most diverse aquatic habitats in the Central Region.

Fort Stanwix, a National Historic Site in Rome, New York is managed by the National Park Service. The site includes a re-creation of a colonial-era fort, where guides dress in costumes and provide insight into life in the 18th century.

Located in the City of Amsterdam, you will find a pedestrian bridge spanning 511 feet that crosses over the Mohawk River. The bridge connects Riverlink Park on the north shore of the river with Bridge St. on the south shore. The bridge features numerous trees and flowers as well as local historical and cultural information engraved into the decking on plaques along the railings. It is the first bridge over water to include live trees planted on its surface.

The stone Mabee Farmhouse, dating from 1705 and the oldest structure in the Mohawk Valley, is located in Rotterdam about six miles west of Schenectady. The 9-acre property along the Mohawk River was donated to the Schenectady County Historical Society in 1993.

The easternmost part of the trail, which spans 39 miles from Little Falls to Albany, leaves the Mohawk Valley in Cohoes and turns south to the Hudson Valley. As the trail reaches the eastern end in Albany, it runs through wooded areas along the Hudson River before connecting with Corning Riverfront Park in downtown Albany.

Click here to check out more places along the Erie Canalway to see and do and plan your official end of isolation itinerary.